Wear your karate bottoms and a white t-shirt. Have gum shields, pads and protection with you. 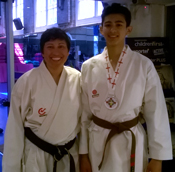 Well done to all the members of Club Phoenix for their hard work and success in Junior League (results on the UKA site).

And a special congratulations to Sebastian Mendez who competed at the 2015 World Championships in Slovenia as part of the England Team winning gold (!) and two bronze medals (see Sebastian competing on the Videos page and pictures in the Photo Gallery).

Phoenix found themselves in Division 3 simply by default having dropped out of the league for a season, but they have got themselves back into Div 2 at the first attempt with 24 match points.

Karate is a martial art and one part of our sport involves
supervised fighting in a controlled setting
and subject to carefully enforced rules.

Junior League Competitions enable students to compete
with people from other clubs.
Participation is encouraged as a way for each student
to develop their skills and potential.

Our school of Wado-Ryu Karate-Do is part of
United Karate Association - UKA
(an association of karate clubs).

Six of the members of UKA have formed the Junior League.
This League organizes regular competitions where all
six clubs compete against each other.
Our team is called Team Phoenix.

Usually there are eight members on each team;
two students in each weight division.
Often there will also be several reserve team members.

The team is sub-divided by weight class; there are
four weight classes in the Junior League.

Students only compete against others in their own weight class.

Membership of our Junior League team is open to any
student who is under sixteen.
Sensei makes the final selection as to which
students will make up the team.

The selection is based on each student’s skills, attitude and maturity.

Generally, most students who wish to participate in
these competitions will be given an opportunity to do so.

During Junior League competitions, each team member will fight
one opponent from each of the other teams.

Each match lasts for two minutes and is refereed.
The match is decided on a point system;
to win a competitor would need to score four half-points,
two full points or a combination of full and half points.

Team ranking is based on the aggregate
number of points scored by the team during the event
rather than the number of individual matches won or lost. 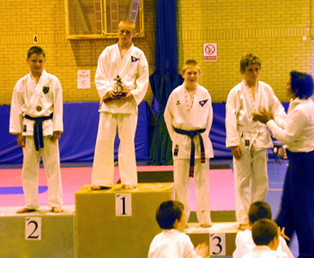 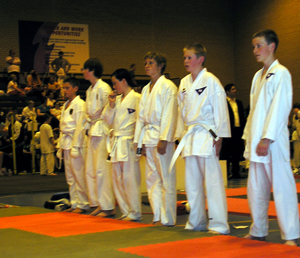