Details of the next Facebook class sent out on WhatsApp each week.

•If any student, parent or relative of a student shows any symptoms do not attend classes. Inform the club for track and trace, isolate and get tested.

•There will be a one way system for entering and exiting.

•Parents will not be allowed to enter. They will drop off and pick up.

•Students must wait to be invited in, they may not enter uninvited.

•All students from one session must have left before the next session may enter.

•Students will need to arrive 10 minutes before their lesson, and wait to be invited in, keeping 2 metres apart at all times when waiting outside. Students arriving late will not be invited in.

•Students will use provided hand sanitizer at the entry and exit stations when arriving and leaving.

•Students will not wear masks during the class.

•Trainers must be worn at all times (no bare foot training, sandals, flip flops, crocs, etc).

•All students will keep 2 metres apart at all times inside the dojo.

•Shouting (Kiai's) are not allowed.

•Windows and doors will be kept open as much as possible.

•No sharing of drinks or equipment

•Students will have a designated area to place their belongings

and also rules for Corona virus.

See below for Grading and Licence forms.

Don't forget to make sure your licence is up-to-date.

If you'd like a paper copy of the licence form, please get in touch.

As a result of the changes due to the new General Data Protection Regulations (GPDR) we have updated our privacy policy which can be viewed by clicking here.

All of the major karate styles originated in Japan and Japanese training etiquette and Japanese language terms remain an essential part of classical karate training.  Most of the Japanese terms used refer to specific techniques, such as blocks, kicks or punches. During classes, the instructor will use both the English and Japanese names, so that the students slowly learn the Japanese words.

There are a few basic terms and commands that are used only in Japanese and even new students should know them.  These would include:

There is a formal opening and closing to each karate class in which the entire class lines up, side by side, with the highest grade students at the far left and the lowest grade students at the far right.  The instructor will be in front, facing the class.  The class is first called to attention and then told to kneel down (left knee first).  Once everyone is kneeling, the command is given for all of the students to bow to the instructor.  Then they are again commanded to bow, this time as a mark of respect for their fellow students. The instructor then tells the students to stand up and a third command to bow is given and the class and the instructor bow to one another.  All of these commands are given only in Japanese.

There are some very common commands that students normally learn very quickly.  They are used very often and are pretty important. These words are:

Students preparing for their first grading (yellow belt) will be expected to be able to count from one to ten in Japanese.  The numbers are as follows:

There are also a few terms that will often be combined with other terms.  When executing blocks, kicks and punches, it is essential to know the target area for the technique.  It’s also important to know the words for left and right.

There are a very large number of different kicks, punches and blocks in karate.  Some of them are very common while others may be very unusual and rarely taught or used.  Some of the most common and basic techniques include:

There are also dozens of different stances, or ways of standing.  About a dozen stances are often used; others are difficult and seldom employed.  When learning the names of the different stances, it is also important to learn the position of the feet, so rather than give the Japanese terms for the stances and the translations, there is a separate page for stances which also shows the positioning of the feet for each stance.

I have been practicing karate for twenty-eight years, both as an instructor and as a fighter. I started karate when I was ten years old and obtained my first Dan black belt when I was sixteen. It was at that time that I began to assist my instructor in teaching other students. I continued to work as an instructor throughout the time that I was also very actively competing internationally.

In 2002, I largely retired from competition and focused on teaching karate. I then opened my own karate school, in association with the United Karate Association.

As a competitor, between 1988 and 2002, I fought as a heavyweight all over the world, from South Africa to Malaysia, as well as France, the Philippines, Finland, Spain, the Netherlands, Czechoslovakia among many other places. I won the World Championship in the Ladies heavyweight division both individual and team, World Cup and World Games competitions, numerous European championships as well as Gold in a number of British national championships.

I am now a Fourth Dan Black Belt and I continue to be involved in all aspects of karate, including teaching, coaching, refereeing and occasionally, competing.

It is a blend of a number of martial arts found in Japan, China, Korea and other areas of Asia.

The Wado-Ryu style was founded by Hironori Ohtsuka and was recognized as a distinct karate style in 1934. Ohtsuka’s principle innovations were to borrow techniques from judo, kendo, and aikido and to adopt a less formal, more flexible, fighting style.

Karate is a fighting system with a broad repertoire of blocks, strikes and kicks, whose effectiveness is based on speed, technique and targeting rather than brute strength. Often we strive to evade rather than encounter and to use and turn the opponent’s attacks to the defender’s advantage.

Karate is practiced both as a sport and as self-defence training. The levels of physical contact during sparring vary considerably. Some styles uses full power techniques but the usual sport karate is structured, with light contact or semi contact and points are awarded by a referee.

Does a person need to be really fit to learn karate?

No, provided that the person does not have serious medical problems and is not substantially overweight. However karate involves strenuous exercise and students should expect to train vigorously during practice.

Who can come to your classes?

Almost anyone can come to karate classes, young or old, man or woman, boy or girl. Students range from as young as five years old to over sixty years old. Children and younger teenagers are taught in one set of classes and adults and older teens in another set of classes.

How do I get started?

All you need to do is turn up a few minutes before one of the classes wearing loose fitting clothing such as track suit bottoms and a T-shirt. We train in bare feet so no need to worry about footwear. There are changing rooms, lockers and showers at all venues. The first class is free. Do bring a bottle of water.

Where are the classes?

There are classes in Wanstead.  The Venues/Classes tab above shows the locations, days and times of the classes.

Classes always begin with warm-up exercises and stretching. After that, classes vary considerably from week to week, some involve practicing basic techniques, bag work, pair techniques, kata training or sparring. Out-takes from a typical session can be found by selecting the Class Sampler under the Video tab.

No, it is not.  There is no equipment to buy.  The karate uniform, the gi, is inexpensive and will last for years.  The only expenses are a small annual license fee and modest fees for lessons.

Is karate a competitive sport?

Karate can be a competitive sport but for many people it is primarily an interesting and challenging way of keeping physically fit. People who are mainly interested in maintaining fitness compete against themselves by noting their improvements in their skills, strength, agility and endurance. They also have the opportunity to periodically measure progress through grading by their instructor.

These progress assessments or gradings are a traditional part of karate training. Everyone begins as a white belt and, as they become more skilled at

karate, they may earn red, yellow, orange, green, blue and brown belts. The most serious students, after years of training, may even become black belts!

Are there opportunities to compete?

Are you affiliated with any karate association?

Yes, this karate school is a member of the United Karate Association. Click on the UKA logo above to visit their website.

if you have any questions about this site 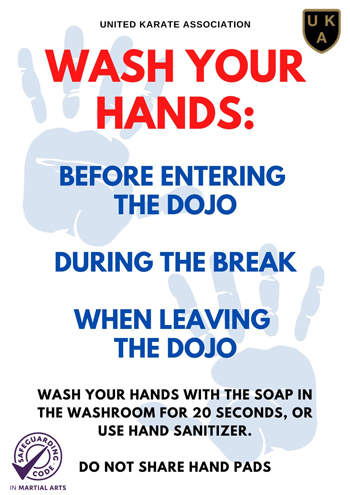